Parents: We believe in public schools 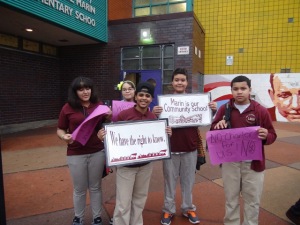 The vote for public education was a resounding statement by an overwhelming majority of parents to reinvest in our neighborhood public schools. Their vote shut down attempts to shame and divide stable and established school communities. Instead parents talked about strong teacher & staff relationships, stable leadership, a culture of respect, and meaningful parent voice – not just pretenses at parent “choice.”

Both the Steel and Muñoz Marìn votes are a huge referendum on the District’s signature reform initiative: Parents reject Renaissance charters. Steel and Muñoz Marìn parents raised significant concerns about management, narrowly-defined academic gains, and millions of dollars in costs lost to this effort. These were not votes based on ignorance. Both Mastery Schools Inc. and ASPIRA, Inc are charter operators that are well known within the communities they targeted. Many families had experiences with each charter operator. As fellow parents we have to ask, how many of the other two dozen-some Renaissance charter school communities would have voted to remain a District public school if given the opportunity? We urge the District to review the Renaissance program and particularly the voices and desires of school communities who are organized and organizing around their real – rather than perceived – needs.

Renaissance charters are the major impetus behind the 50 percent explosion of growth in charters in the last two years – growth which has come at enormous financial cost to the District. In the past month, Parents United has noted that the District would have paid Mastery Charter Inc. a $5.9 million contract to run Edward T. Steel school as a charter, but failed to make a similar investment in Steel as a District public school. Recently, WHYY Newsworks reported that Kenderton Elementary (which was converted to charter last year) spent $2.7 million as a District public school and is now charged $5.1 million as a charter contract with Scholars Academy. At a time of deep financial crisis, it’s hard to understand the District ideological message that schools are only worth investing in when they become charter.

The fact of the matter is that parents believe any system of choice must fundamentally include quality public schools as a central option. Parents do not tolerate a disinvestment in their schools, their children or their communities. We support the role of voting parent communities. And we thank the Luis Muñoz Marìn and Edward T. Steel school communities for reminding us, once again, that the vision forward for public education lies with the voices of parents who understand our children are more than just a test score.

One thought on “Munoz-Marin parents: We believe in public schools”