The past week has been kind of a whirlwind as a host of events converged around our Parents United work seemingly all at once. I thought I’d share a few thoughts about what it’s been like. TEDx Philadelphia

By far one of the most intense experiences of my life was going on stage at TEDx Philadelphia at the beautiful Temple Performing Arts Center on March 28. TEDx is quite the production, and my fellow speakers were simply stunning. From the luminous Natalie Nixon who talked about seeing life through jazz, to talks on education from Science Leadership Academy student Nikki Adeli and YouthBuild Executive Director Simran Sidhu, to Austin Seraphin conveying the wonders of accessibility tools when you grow up blind, TEDx was a tribute to the creativity, vitality and energy of so many of our city’s best denizens. I have to say that I struggled mightily in this context, not the least of which is that I decided to largely forego a slide show and do a talk about collective values which engage us around our schools. I spoke about public spaces and collective responsibility for preserving, fighting for and uplifting our public schools despite their struggles. I also realized that when you don’t have slides, you end up on stage in front of 1200 people, 18 minutes on the clock and just your voice and ideas. Not sure I would entirely recommend that approach unless you’re someone like Bryan Stevenson, but I have to thank the entire TEDx audience and organizers for giving me the opportunity and space to try. You can catch all the TEDx talks on YouTube in a few weeks.

If rabble-rousing is a sport, looks like Parents United for Public Education is a champion! April’s Philadelphia Magazine named me one of their 75 most influential people in Philadelphia and one of the top 10 movers and shakers in civics. Here’s what they had to say:

” . . as co-founder of Parents United for Public Education, she’s managed to force the public at large to rethink the furious march toward reform, thereby slowing down a huge public policy initiative.”

Psst, Philly Mag: one suggestion. From a parent perspective, too much of ed reform in Philly isn’t really a public policy initiative. It’s more like a public hijacking. That being said, there’s no question parents have made public education the number one voter issue in the state of Pennsylvania and our city. To us, power isn’t a label you slap on. Real power is when parents band together and file over 800 complaints from 90+ different schools about violations of the Pennsylvania code as a result of underfunding. That effort helped shake loose $45 million that the state was holding hostage for union concessions. It restored hundreds of staff back into schools – namely, teachers, counselors and administrative staff who were the focus of the complaints – and more than a third of which went into restoring special needs programs and services that parents demanded. Power is when parents like Rebecca Poyourow and the AS Jenks community make a passionate plea around the educational harms of split grade classrooms – and succeed in reducing 100 split grade classrooms down to less than a handful. It’s when Parents United parents like Robin Roberts, Tomika Anglin, JoAnn Rogan, and Alison McDowell help the public rethink reform initiatives like high stakes testing. Once a casually accepted measure of student achievement and school quality, high-stakes testing took a beating from the Inquirer editorial board this week which supported the opt-out movement in the most radical and rebellious way possible:

“If enough parents follow Roberts’ example, maybe Gov. Corbett and the legislature will make it a higher priority to increase funding not just for Philadelphia, but for schools across the state.”

Now that’s parent power. That’s a real parent voice. It’s not about the label. It’s about building a better understanding of justice and injustice, of creating more compassionate, sensible and child-centered ways of improving education. Thank you to Philly Mag for recognizing this work. We’re keeping the movement and momentum going for meaningful and lasting change that makes a difference for all of us and our fellow neighbors. 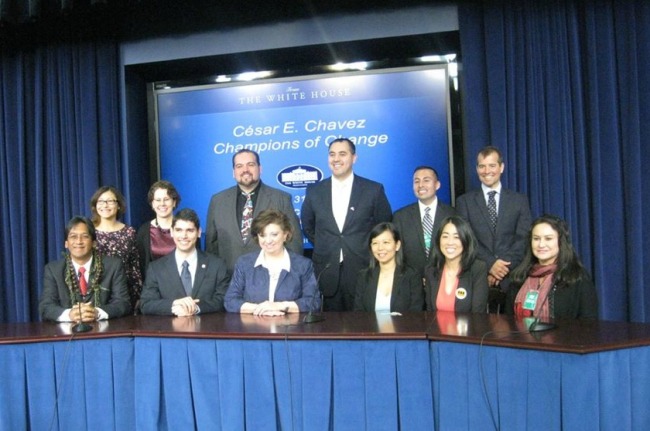 It was an enormous honor to receive the Cesar Chavez award for Public Service as a White House Champion of Change on March 31. What was most rewarding was just the incredible outpouring of good will, congratulations, and celebration from so many different parts of my life. Most people don’t realize that I really did not grow up with a very activist mindset. I was pretty much a midwestern, suburban kid from an immigrant family who grew up in Ronald Reagan’s America. I went to Penn and was an erratic student (major highs and lows) and mostly hung around my college newspaper until all hours of the morning. I didn’t really become politicized until I returned to Philadelphia, found a political home at Asian Americans United, became a school teacher at Lowell Elementary School in Olney and learned at the feet of a pretty remarkable set of Philadelphians who changed and continue to influence and transform my life and way of thinking. As you can imagine, I was a pretty big pain in the butt to my earliest mentors at Asian Americans United and my fellow teachers at Lowell, always asking questions and demanding to know why my world view was being completely upended by everything around me.  I benefited enormously from the amazing lessons learned from a powerful matriarchy of activists at Asian Americans United, who taught me and continue to teach me about community building, humility, and the responsibility of passing down our lessons and legacies. I love every single one of my fellow parents at Parents United for Public Education. Many of us started out in classrooms and schoolyards and then kept right on going into the halls of 440, City Hall and Harrisburg, tackling issues far beyond what we thought we were capable of.  From the Public School Notebook to ReThinking Schools to the Philadelphia Folklore Project and the founding of the Folk Arts-Cultural Treasures Charter School, being part of collective efforts to make Philadelphia and our world a better place has been an amazing journey. Thank you all.

You can read my blog post for the White House Champions of Change event.

And huge thanks to friend and colleague Amanda Bergson-Shilcock for this generous tweet of endorsement!

If you're going to read one single thing that Helen Gym has written this year, make it this on public institutions: http://t.co/qtOIORWgrl

Most of the week’s excitement came to a crashing halt when the District announced on April 1 that Steel and Munoz-Marin Elementary schools would be targeted for conversion to charter. A year ago, Parents United had joined Concerned Neighbors of Nicetown and Steel Elementary who had hosted an Education Town Hall amid the school closures last winter. We made some great connections that continue today. Steel and Nicetown parents and families reached out to us for support, and we’ve tried to navigate our way through what has to be one of the most divisive and disrespectful processes of education reform we have seen in a while. Parents at these school communities are being “given” a vote on May 1: Either go with a designated charter school – a conversion the District estimates costs $4,000 a student – or stay with the District which won’t guarantee additional resources for families. That’s no one’s definition of choice. Meanwhile, we’ve been told that Steel is the last public school standing in the Nicetown neighborhood and that Mastery has been campaigning in the area for months. We’re committed to working for quality public schools in every neighborhood and making sure an engaged and informed parent body makes the vote. Let us know if you can support this work!

Speaking with Diane Ravitch at AERA

Well, it’s not everyday that you get the call to join one of the nation’s premier speakers on ed reform at a major national conference. That’s what happened when Professor Carl Grant from the University of Wisconsin asked me if I were interested in sharing time with Diane Ravitch at the American Educational Research Association national meeting held in Philadelphia this past weekend. “Are you sure she wants to share time with me?” was my question back to Professor Grant. I should have known better. Diane Ravitch is one of the least selfish people I know, especially considering someone of her stature. She has been an enthusiastic supporter of local organizing struggles all over this country and goes out of her way to use her voice and her massive bully pulpit to elevate everyday heroes in the battle for public education. She has always made space for Philadelphia and has even featured Parents United’s activism on her website. To be honest, I had received a few calls to participate in panels and discussions at AERA and turned most of them down. But once Dr. Grant called about this opportunity, I decided to take it for one primary purpose: I wanted to tell ed researchers that too many of them have let us down. Here’s a short excerpt of my remarks:

“As a parent, as a community member, as someone contacted by many of you, I want to say this in the most supportive but clear way possible. You have let us down.

Parents, community members, youth and our teachers, principals, school board members, superintendents and others are engaged in the battle of our lives for our very schools, our communities, and our children – but where are many of you? Frankly I am shocked by the ways in which this professional company of researchers has ceded your own territory to a bunch of monied, slick group of hucksters who, armed with questionable, biased studies and research, have barreled into the academic and public sphere, skewed the conversation, used rhetoric and power to silence dissent, and claimed the space of education innovation, expertise, research and oversight. . . .

We need and crave real research rooted in the experiences and voices of communities and parents you claim to serve and study. This is happening on your watch. This is not a moment to let pass by and for you to document on some anthropological dig years later. This is a moment that should call all of us together to action.”

It was a great crowd. It was also the wrong crowd – since most people attending the session were NOT the people I was really directing my comments at! It was a great moment though and in a week where I searched to find the right voice, I felt I finally said what I wanted to say the way I wanted to say it that day. Above all, thanks to Diane for sharing her time to highlight the Philadelphia struggle and for this glowing endorsement!

Helen Gym is a co-founder of Parents United for Public Education.

2 thoughts on “From the White House to Diane Ravitch: A whirlwind week for Parents United”