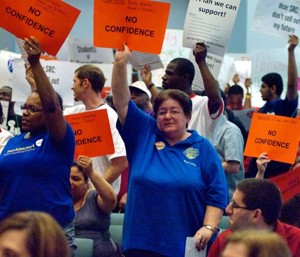 The plan threw around phrases like “seat expansion,” “achievement networks” and “portfolio services.” But you’d find little if anything in the plan that parents have repeatedly called for: manageable class sizes, nurses, school safety protocols, librarians, art/music for every child, adequate support personnel, fresh healthy food, and an academically-rich curriculum.

Haven’t we done this before?

A decade ago, a state takeover promised privatization, charters and an unelected School Reform Commission would fix a district in academic and fiscal distress. Ten years of state control has brought us two bankruptcies, failed experiments, and ethical scandals among individual SRC members. Yet, the same tired ideas are recycling again.

This time however, we should not be naive about what we’re seeing happening to Philadelphia public schools.

A nationalized, homogenized agenda funded primarily by private interests via non-profits and foundations taking renewed interest in the re-structuring of public education has put our schools directly into their sights. This agenda is a pattern of “reform” being pushed in city after city across the country. It’s a franchise and it’s what many of us refer to as the “corporate ed reform” agenda. Look no further than the influence of a multinational corporation called the Boston Consulting Group (BCG), the “consultant” behind much of the District restructuring plan. What hasn’t been discussed is how private interests not only paid for BCG’s work but contracted with them directly to do it. (Read more about BCG and Parents United’s call for transparency on this contract.)

Over the past year, you’ve seen or likely been part of a huge outcry from schools, communities, youth and parents. Parents United for Public Education, along with our partners the Philadelphia Home and School Council and the Philadelphia Right to Education Local Task Force, organized a vote of “NO CONFIDENCE” among more than 50 Home and School Associations and parent organizations. Read about our vote of No Confidence . Thousands of parents and concerned citizens came out around the school closing hearings with an overwhelming cry against it. And this spring, thousands of students have taken to the streets in dramatic walk-outs which have shown the depth to which the corporate ed reform agenda has triggered massive pushback.

The District restructuring plan is a dismantling of public education as we know it. It excuses underfunding and inequity underwritten by the state of Pennsylvania. It pushes off many of our neediest populations to the erratic and hard-to-track performance of private managers. It pays far too little attention to teaching and learning and ignores the importance of ensuring a stable, experienced teaching force and promoting a rich academic curriculum. It equates “autonomy” with cutting schools loose without resources like lifeboats from a sinking ship. And it forces parents into a do-it-yourself education “choice” system which reinforces inequity and a false sense of choice for parents who need equity and justice the most.

Parents United for Public Education wants a parent agenda for change. We believe our public schools can be sites of transformation. We believe investing in our school facilities not only invests in our children’s educational future but also puts Philadelphians back to work, provides a catalyst for long-neglected neighborhoods, and builds true community school models.

Let’s work together for a community vision for transforming Philadelphia’s schools.

Responses to the District Restructuring Plan

One thought on “The “corporate ed reform” agenda in Philly”