We’re well into 2014, but we wanted to thank all of our readers, supporters and funders for an important year of parent activism in 2013 and our first full year with our Parents United blog. Here’s a look back at our top five most-read blog posts of 2013. Thanks for reading and commenting!

Back to School: It’s So Much Worse Than You Think 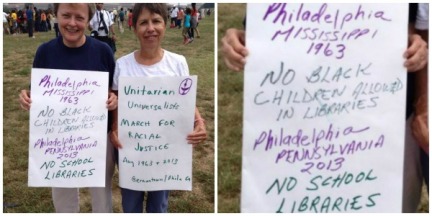 Retired teacher Barbara Dowdall and friend at the 50th Anniversary of the March on Washington for Jobs and Freedom. They had attended the original march as teenagers.

Schools opened in September but just barely. Of greater concern, the District sent very little communication to parents about what we should actually expect – serious and widespread overcrowding, 100 split grade classrooms, an absence of counselors, support personnel and administrators. Parents United, in partnership with the Public Interest Law Center of Philadelphia and other groups, launched an effort to file hundreds of formal complaints against the state Dept. of Education for their failure to properly fund schools and highlight the consequences of this shameful deprivation of basic educational resources and staffing. This post which ran just before the opening of school was the most widely read blog post on our site, attracted national attention, and was sadly prescient about a grim start to a school year whose consequences continue today. [Read the post]

Her name is LaPorshia Massey and our hearts are breaking

In late September just three weeks after the start of school, sixth grader LaPorshia Massey experienced an asthma attack at her school. With no nurse on duty, school staff did what they could and drove her home after school. The 12 -year-old died of asthma later that day at the emergency room. This tragedy struck home for every single parent and staff person in the District.  For the past two years, school nurses have moved to an almost 1:1500 staff ratio, leaving most schools without full-time nurses or trained health care professionals. Principals administer insulin shots, staff with minimal training dispense medications for dozens of students, and untrained individuals are required to address unexpected illnesses, accidents, and medical emergencies that aren’t conveniently scheduled when a school nurse happens to be at school. The situation is dangerous and unsustainable. We mourn for the Massey family and all those who loved and cared for LaPorshia. We will continue to honor her memory by fighting for responsible and safe staffing ratios and school climates for all our children. [Read the post]

This is not a school: Parents United statement on District layoffs

On June 7, the School Reform Commission voted to lay off more than 3,000 school employees. The layoffs eliminated hundreds of teachers and assistant principals, and every single counselor, aide and school secretary for every single school in the city. Layoffs don’t just eliminate positions on a spreadsheet. They fracture close knit relationships in schools, they eliminate institutional knowledge and capacity. You don’t just write a college recommendation cold turkey any more than you expect a merry go round of administrators to roster schedules or work their way through an elementary school student’s placement. The layoffs came just a few months after the SRC voted to close down 24 public schools thus assuring that every child in the closing schools would move on to a school that was worse off than the one they had just attended. In late August the District rehired a number of staff and, in November, they restored additional positions after parents worked to force the state to restore $45 million in federal funds. Nevertheless, our schools are nowhere near last year’s levels -which were already grossly inadequate. This issue remains a top focus of Parents United’s work for 2014. [Read the post]

SRC statement: Going to war on your own soldiers

Teachers crowd an August SRC meeting where commissioners voted to suspend the state school code and unilaterally impose restrictions onto the contract.

On August 15, the School Reform Commission voted to suspend the state code and strip seniority from the teacher’s union contract. The move had long been championed by a host of so-called reformers, who had even hired a well-known partisan polling group to encourage Governor Corbett to exploit the Philadelphia schools crisis and blame the teachers union for political gain. This statement by Parents United co-founder Helen Gym re-used a phrase by Diane Ravitch in which she asks: Who wins a war by firing on their own soldiers? [Read the post]

What it means for parents to support teachers

This sign from last summer’s Chicago Teachers Union strike defines why and how parents and teachers can align. (Source: Associated Press)

If there’s one thing which defines the corporate education reform agenda in schools these days, it’s a narrative that tries to drive a wedge between parents and those on the front lines of caring for our children: our teachers. While many of us see our schools gutted of funding and political support, we’re told that our teachers are the primary blame for our children’s failure or success. When parents talk about a rich and varied curriculum in the arts and sciences, we’re told that it’s the teacher’s fault for not raising test scores. When we talk about higher level thinking and teaching that excites the imagination and intellect, we’re told that we don’t need experienced teachers to do that; any five week trainee can deliver what our kids need for the tests. When we talk about caring and nurturing relationships, we’re told that we don’t need more teachers or smaller classes; in fact, fewer teachers and larger class sizes do just as well no matter what the circumstances. And when we talk about happy and healthy school climates for children to learn and grow, we’re told that teachers are living too high on the hog, have too much job security and that the solution is to have far less. Makes no sense right? Look, no parent – or teacher for that matter -excuses an abusive or grossly negligent individual. But we make a big mistake in placing all the blame for a child’s success on the teacher alone, and frankly as parents we’re baffled by the education reform movement’s obsession with teachers as the primary villain. Can teachers do better? Sure. Let’s start with responsibly staffed schools, professional development, and a peer support network, not lowering teacher salaries and eliminating “perks” like access to a desk, books and paper supplies.  This post defined the ways in which parents and teachers can align to build stronger schools and find common ground in a year of struggle and pushback. [Read the post]