Philadelphia’s budget crisis made the front page of the New York Times under the headline “A City borrows so its schools open on time.” The story featured the voices of Parents United members Tomika Anglin, Leslie Tyler, and Helen Gym. An accompanying photo essay highlighted a town hall on education at Mother Bethel A.M.E..  Mark Tyler, pastor of Mother Bethel A.M.E. and a leader of P.O.W.E.R. – a 41 member interfaith coalition, is featured in photos along with Mark and Leslie’s two daughters, Madison and Sharon.  Helen Gym was the New York Times “Quote of the Day” with this piece:

“The concept is just jaw-dropping,” said Helen Gym, who has three children in the city’s public schools. “Nobody is talking about what it takes to get a child educated. It’s just about what the lowest number is needed to get the bare minimum. That’s what we’re talking about here: the deliberate starvation of one of the nation’s biggest school districts.”

Philadelphia also was the subject of significant pieces at Salon, the Huffington Post, and the Washington Post Answer Sheet blog.  Salon’s article “Indescribably insane: A public school system from hell” was a no-holds barred takedown of Governor Tom Corbett’s purposeful and relentless underfunding of public school districts across the Commonwealth, and featured Helen Gym as one of the speakers. Huffington Post covered a P.O.W.E.R. /Parents United/Philadelphia Student Union press conference on the schools, calling for more money and for schools to open only when they are safe. The Washington Post‘s Answer Sheet did an interview with Helen Gym on the background of the Philadelphia schools crisis.

Parents United co-founder is commenter on Gallup poll on education 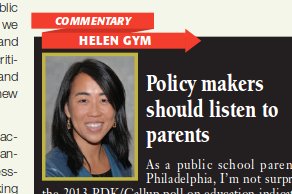 Parents United’s co-founder Helen Gym was an analyst and commenter for the national PDK/Gallup poll on public education, the nation’s oldest poll tracking public attitudes towards schools. The 2013 poll showed some of the strongest public support in decades for both public schools and teachers while rejecting many current education reform practices like high stakes testing, vouchers, de-funding of schools and test-based teacher evaluations.  According to the poll, most parents believe the top problems with their schools are lack of funding and overcrowded classrooms. Interestingly enough, it also showed that more respondents believe that public school teachers have a right to go on strike.

“Parents overwhelmingly believe in public schools. We want financial support and smaller class sizes. We want a focus on teaching and learning, not just test scores. Since education policy makers say parent support is a top indicator of school success, they would do well to act on what parents are saying.”

In a follow up to the poll, Helen was quoted in U.S. News and World Report around the disconnect between setting extremely high standards such as the Common Core, and Pennsylvania’s refusal to fund schools responsibly:

“It’s almost laughable to talk about kids being college and career ready when 60 percent of high schools may not even have a guidance counselor.” – Helen Gym, U.S. News and World Report, “Budget cuts, not standards, are top concern for parents” 8/21/2013

Read the full poll and Helen’s comments on page 23.